Growing up, I would often hear women refer to themselves as “football widows.”  It never resonated with me, since college football was more of a lifestyle than a hobby in my family.  My mother and grandmothers and aunts were very much alive and present on game days, cursing and screaming throughout every play.  In fact, when I look back, the whole world seemed a few ticks away from a heart attack, regardless of gender.  So what about widowers?  They seemed just as likely.

The women I knew simply did not fit into the punchline of the sports widow jokes, therefore I never expected to either.

This week, I became a “Camaro Widow.” 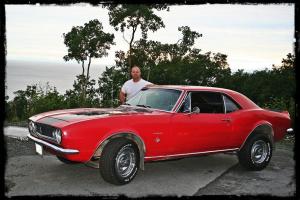 To be honest, I don’t mind.  Instead of losing a husband, I feel like I’ve gained a co-wife.  She is so happy to be rubbed down with wax while Clark blares ’80s music in the garage, leaving me free to write or read or even mop if goddammit that’s what I want to do upstairs.  (NOTE:  mopping is not what I ever want to do upstairs.)

This 1967 Camaro was Clark’s first car, and quite possibly his first love.  After all these years, the time was finally right to move her north, so in July he made arrangements with a local vehicle transport company.  Last weekend, after 18 agonizing days of waiting (or 15 long years, depending on how you look at it), the semi finally rolled into Eagle River carrying a load of vehicles for Quality Used Autos.  Plus one.

The Camaro was the +1.  And just as instantly, the Camaro became Clark’s +1 again.

Okay, they needed to make up for some lost time.  They hadn’t seen each other much since the college days.  She needed to be washed.  And polished.  And vacuumed.  And immediately driven to a car show.  You get the drift.

The day the Camaro arrived, I dropped Clark off with the car and genuinely enjoyed watching his reunion with the old girl.  He was thrilled to drive off to some unknown destination – just happy to be driving – and I was equally happy to head another direction to do my own thing.  Later that afternoon we were both home, but the kids were spending the night with a friend.  Clark was tinkering with the Camaro in the garage, while I was upstairs hanging photos in the guest room.

In this marriage, we are very good at honoring each other as individuals.  There is a lot of trust, a lack of jealousy, and a great amount of support and freedom.  If anything, we need to focus on coming back together in the ways we did before kids.  Back when we regularly played Scrabble, had nightly Sudoku duels, and traveled with dog crates instead of booster seats.  Who were those people?

Luckily Clark is a great husband who realizes this, so he won’t let me be a Camaro Widow for too long on any given day.

After a few hours he yelled upstairs, “Hey, you want to go for a drive?”

His mom was flying in the next day, and the house was still in shambles.  I was starting a class the next morning, for which I was completely unprepared.  And I was trying to fit a stack of horizontal photos into a mountain of vertical picture frames.  I absolutely wanted to go for a drive!

Before I knew it we were cruising down our mountain road in a classic car with marginal brakes and nonexistent seat belts.  We had to yell over the roaring motor and rock music.  The asphalt blurred below us (trust me, I could see it through the holes under the gear shifter) and we both reeked of gasoline fumes by the time Clark double parked at FireTap.  At 8 miles per gallon, driving there probably cost more than our dinner.

But who cared?  Even without seat belts, it felt so safe to cruise with someone who prefers polished old gals to the shiny new models.

One thought on “Classic Marriage”