This world is full of both good witches and bad witches.  I would like to introduce you to one of the good ones:

This witch has one mission:  to create magical memories for children.  She’s pretty good at it too.  Every year she plans a Halloween party that most families would pay to attend, but by some stroke of luck she invites our children for free.  (I try to buy my way in with taco dip, but it’s not nearly enough.)

Nearly all the food on this year’s menu had a fun Halloween twist.  We drank blood punch and ate like royal vampires:  witchy cupcakes, bat brownies, spidery meat and veggie trays, mummy dogs, dirt-cake graveyards, and webbed taco dip.  Then there were the sugar cookies that looked a bit too much like severed fingers (some had bloody jelly inside).  Crock pots were steaming full of pulled pork and chili, so no one left this party hungry. 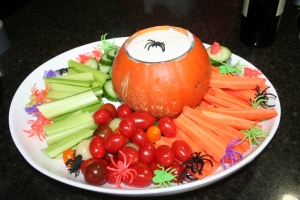 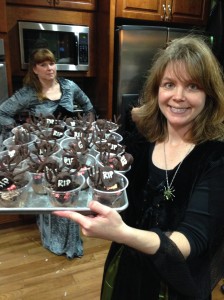 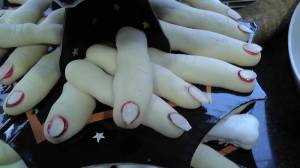 If you think the food at this party looked spooky, wait until you hear about the activities for the children.  There were three:
1.  Potions Room
2.  Scavenger Hunt
3.  Haunted House

First up was the Potions Room.  Our friends completely transformed their dining room: 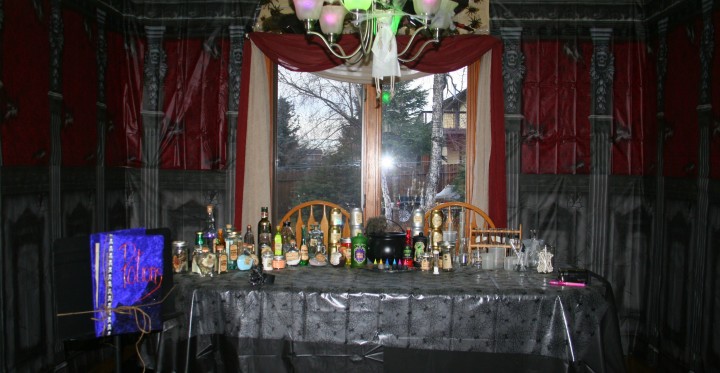 Talk about magic!  This room cast a spell on all of us:  our jaws simply dropped to the floor upon entering.  The backdrop, the chandelier, and all the colorful bottles of eerie looking ingredients.  What on earth would the children do with all of it?  Our crafty, witchy friend spent hours writing a homemade book of potions, as well as assembling all the ingredients.  She harvested bottles, printed labels, researched recipes, and spray painted soda cans.  In the final hours she lovingly assembled the Potions Book, complete with burnt-edge pages.  (I think some of the kids believed she actually traveled to Diagon Alley to purchase this attractive artifact!) 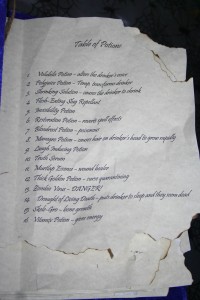 She was an experienced Potions Master, but sadly the children were not.  The witch was kind but critical as the children tried their best to master the recipes in her book!  It wasn’t easy!

It was hard to pull the kids away from the Potions Room, but we had to start the scavenger hunt before dark.  Our friendly witch spent her afternoon hiding scary objects throughout the neighborhood:  a spider, a ghost, a bloody knife, a key, a mask, a bat, a lost witch’s hat, and more.  Each item came with a rhyming clue that led them to the next object, and the kids had to stay together as they searched.

At the end of the scavenger hunt, each child held a spooky object that doubled as a ticket into Activity Number 3:  the Haunted House.

Unfortunately we don’t have any photos of the haunted house.  It was by far the most terrifying part of the party, and most kids didn’t have the courage to enter twice.  It was set up in the garage, a space transformed by black visqueen into three distinct rooms.

In the first room a cackling witch (not our hostess – a much meaner witch) sat at a table with three cauldrons, and she required all haunted house victims to stick their hands into each of them before continuing to the second room.  The cauldrons held intestines, bat brains, and eyeballs – yuck!  As the kids timidly touched these contents, a disheveled chef moaned and limped aimlessly through the room.  There was blood on his coat, brains protruding from his hat, and intestines spilling out from his stomach.

Here is a picture of the terrifying duo in room 1, along with their poor little raccoon daughter:

Luckily this evil witch had a magical ball, and she allowed the children to touch it for the necessary strength to move into Room 2.

Room 2 seemed harmless enough.  It was very dark, other than one glowing creature sitting in a corner chair.  He was moving a bit, but clearly stuffed and harmlessly alone.

Or so they thought.  In reality, another person lurked in the corner – it was this scary dad with the mask: 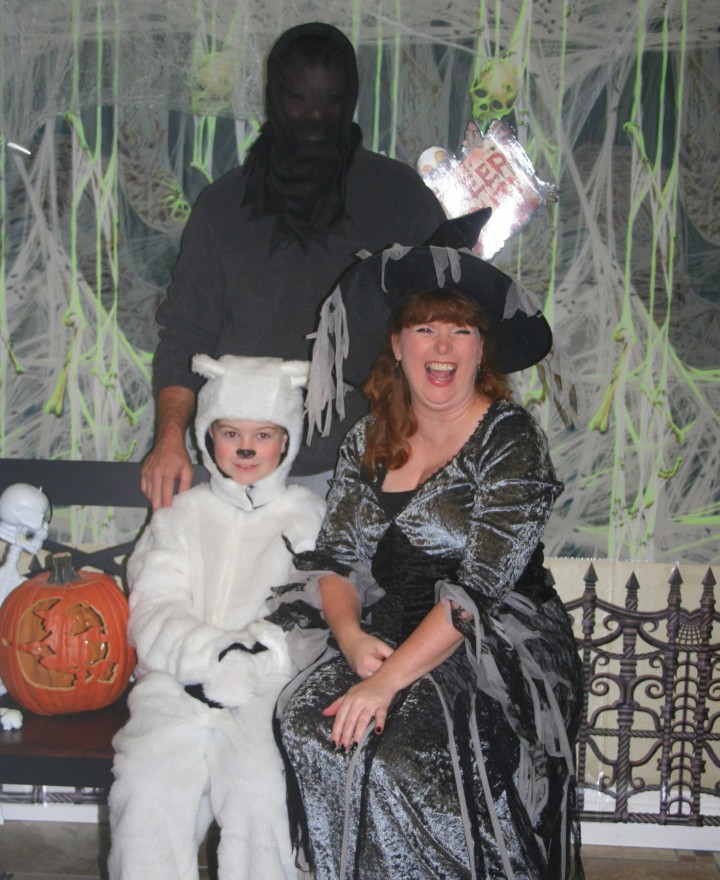 It’s amazing how invisible he was with the black cover over his face.  Just when the kids thought they had safely escaped Room 2, the masked dad jumped out of his hiding spot and SCREAMED!  So did the kids – every time!  (I was leading children through the haunted house and I jumped every time as well, even though I knew he was there.  He was an invisible ninja!)

Scary Dad always sent the kids tearing through the strips of visqueen that led to the final room, where the disheveled chef was now moaning and wandering in circles.  A mummy was stretched out on a table, waving the children to his side and hoarsely whispering, “Come Closer…”  They were reluctant, but the crazy chef blocked their path and guided them to the mummy’s table.  The mummy then uttered a dire warning:  “Be careful of the things you cannot see.”  And wouldn’t you know, at that exact moment, something lurched from under the table and grabbed their legs!!  (That something was the middle school daughter of one of the families at the party.)

We don’t have any pictures of the mummy (proudly played by Clark) but he was wrapped in gauze from the waist up and had a fair amount of blood on his face.  He was glow-in-the-dark horrific.

After the mummy experience, the kids were ready to bolt for the exit.  But just before they could escape, Old Man Lawry jumped out and shrieked, “BE SCARED!!” with all his might.

Yeah, they were scared.  Old Man Lawry has a pretty petrifying scream!

For those who don’t know about Old Man Lawry, he is a terrifying trapper who is the main topic of camp fire ghost stories whenever we visit our friends’ cabin.  The idea of Old Man Lawry scares the kids plenty, but to actually see him dragging his injured leg around in a clanking metal trap was a nightmare come to life: 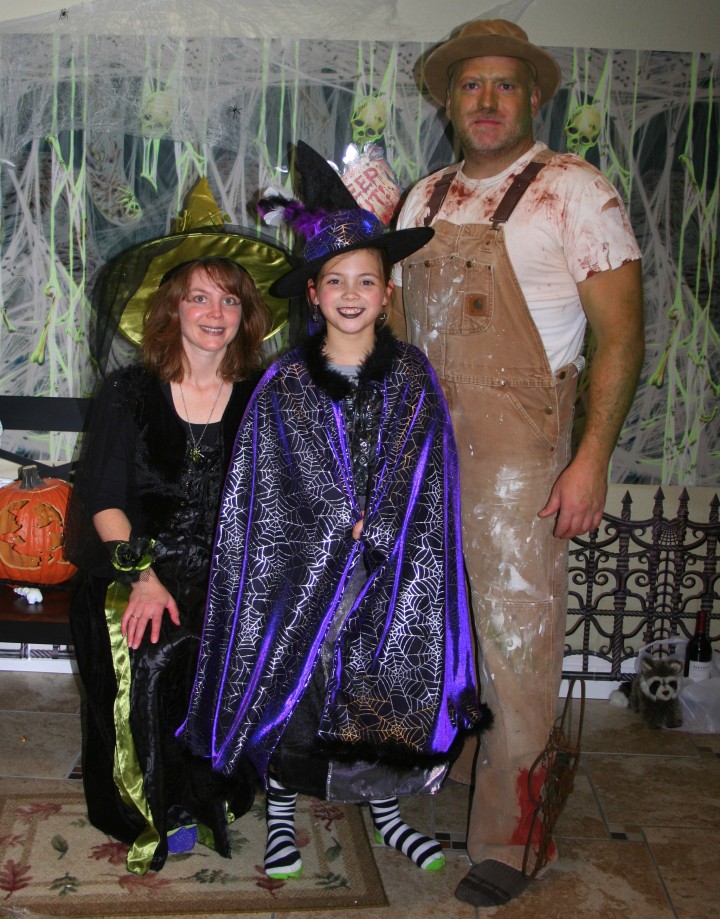 Thankfully, all the children survived the haunted house just in time for dinner.  The kids were free to play for the rest of the evening, and most of them chose to make more potions.  The adults shed their costumes and instantly started reliving memories that were barely an hour old.  (Let’s just say the dads had a lot of fun with the haunted house!)

It was such a fun party: 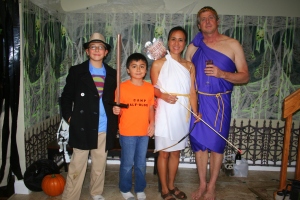 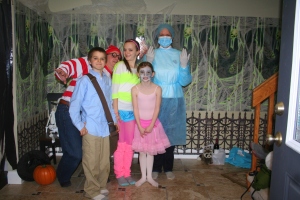 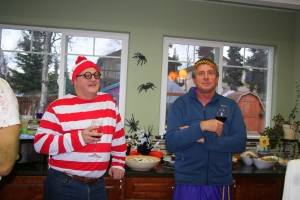 I especially loved the Where’s Waldo costume.  At first I couldn’t figure it out, so I walked up to him and said, “I just can’t place you….”

Dionysus nearly spit out his wine laughing when he declared, “Of course you can’t place Waldo!”

(And I call myself a librarian?  Sigh.)

Dionysus and Artemis were looking pretty good that night, and their superhero children crafted many potions.  (Who knew they gave birth to Clark Kent and Percy Jackson?!)

We meant to take a group shot with Waldo hiding in the background, but Dionysus blessed us with too much wine and we decided to skip it and watch the World Series instead.

As you can see, this party was fun for kids of all ages.  We had a magician in the group, but he had to admit no special spells were necessary at this party. 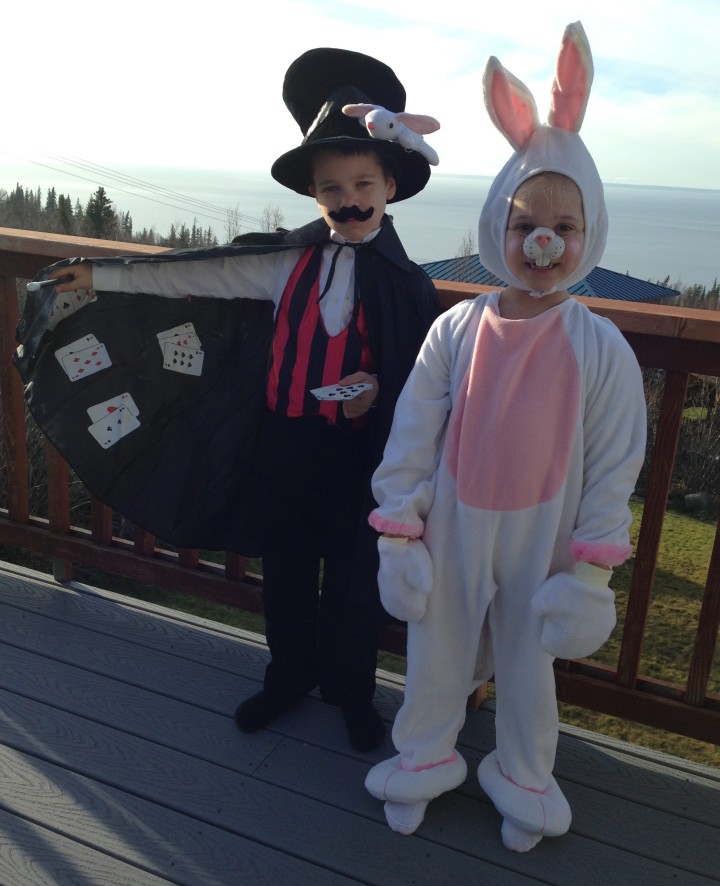 Thank you so much to the head witch who pulled this off… you are generous, creative, and intelligent beyond words.  A magical witch of the best kind.

Thank you to Old Man Lawry, who supports his wife’s Halloween dreams and is a wizard with visqueen and a staple gun.

And thank you to their brilliant little witch, who embodies the best in each of her parents.  She is spunky, crafty, and wise.

This party was a witch’s dream.  Thank you, thank you!