Five weeks ago we implemented a new rule in our home:  kids cook on Wednesday nights.  They are responsible for planning the meal, making the grocery list, accompanying us to the store, cooking the meal, and even cleanup.

I had hoped to lounge on the couch while the kids hummed through the kitchen like little Food Network stars, but it turns out I still have to be present to, you know, teach them stuff.

Adding to my frustration is the sad fact that kids learn some things faster than others.  Mommy swearing at other drivers on the highway imprints immediately, whereas Mommy opening cans of stewed tomatoes doesn’t make an impression at all.  Go figure.

We may as well dub Wednesday Noodle Night, because if there’s one thing our children have in common it’s a love of pasta.  They’ve already made three versions of homemade marinara sauce, and this week they told me I was not allowed to help at all.  So I didn’t.

They brought a CD player to the kitchen and blared the soundtrack to Frozen while they worked.  They divided up the duties without an argument, and I only stepped in for the dangerous tasks like straining boiling water from a heavy pot.  Yes, the cooking was messier than usual, but a few tomato sauce splatters are worth it.

Okay, clearly there were more than a “few” splatters.  The sauce was only half-finished and Sam looked like a bloody butcher, but luckily the Easter bunny brought some chef aprons to keep the stains off their clothes.  (And would you believe all that tomato paste actually washed out?  I highly recommend these aprons and hats from Chefskin and available on Amazon.)

The kids are learning far more than I expected on these cooking nights.  Obviously they are picking up culinary skills:  they can use a can opener and light a gas stove without blowing up the house.  Hopefully by the time we send them off to college they will be able to cook more than Ramen noodles! 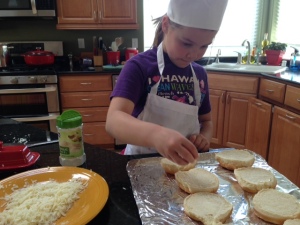 They are also learning gratitude for the chef.  They now know firsthand how difficult it is to deliver decent dinners on a daily basis, and are less apt to complain about the menu.

They are learning about nutrition and science.  In the past month our kids have strained grease from both store-bought Italian sausage (yuck!) and our own moose hamburger (better).  In both cases we let the grease coagulate and had a great conversation about why it would be horrible to send that goo through your arteries, not to mention septic system.

But best of all, they are learning the sense of pride that comes from a job well done.  The last thing we want to send into the world are a couple of entitled children who expect others to serve them.  We want them to understand the importance of stepping up to help when it’s needed, and that is the ultimate goal of Noodle Night.

Oh, and a little help with the dishes every now and then…