This is not a post about Barack Obama or Mitt Romney.  There are already plenty of those, and since I was one of the early voters it’s out of my hands anyway.  I’ll avoid making judgments today and wait for the wisdom of hindsight.

Instead, this is a post about our son Sam and our dog Kodi.  The events in this post happened eight years ago, so I definitely have the hindsight.  I’m still waiting for the wisdom, and I’ll leave the judgment up to you.

Thanks to Sam, I had the privilege of voting as a mother for the first time back in the 2004 Presidential Election.  He was a 5-month old baby, and I was a working mom who desperately missed my child all day long.  As a result, I always picked him up from daycare as soon as I got off work, even if it meant dragging him to the grocery store, an oil change, or some other random errand.

On November 2nd, 2004, that random errand happened to be voting for the next President of the United States.  This was a huge deal, because Sam owned this red, white, and blue Onesie that screamed for an “I Voted Today” sticker to be plastered to his cute little belly.  As a relatively new mother I had it all planned out:  I would beeline to daycare right after work, snatch Sam, and head to the polling station so we could get the sticker and document his first Presidential Election.

I was a photojournalist seeking to preserve this slice of Sam’s history, and felt a deep need to record this momentous occasion in his life.  It was his first election:  this was huge.

Everything went according to plan until I arrived at daycare to find Sam dressed in some hideous outfit that was a few months too small.  Apparently he had an episode of blow out diarrhea and they had to change him into these unpatriotic, ill-fitting clothes.  His perfectly patriotic Onesie was now scrunched in a ball, sequestered in a plastic grocery sack, and crammed in the bottom of our diaper bag.  I was crushed.

A newer mother may have given up, but I had a full 5 months of experience under my maternity belt.  A new plan emerged:  I would go vote, get the sticker, and then head home to wash his clothes and stage some photos in our living room.  Brilliant.

We arrived at the polling station, and I decided to carry Sam rather than lug his infant carrier inside.  True, he was getting heavier with each passing month, but in all my years of voting the longest I had ever waited in line was five minutes.  If there was a line at all.

Not this time.  The line weaved throughout a few rooms before we could even enter the hallway to the voting booths.  It was brutally hot, and I was wearing a wool sweater, a wool coat, and holding a 17 lb. baby wrapped in a fleece blanket.  I’m glad there were no questions about global warming on the ballot, because my perspective would have been skewed.

After about 20 minutes in line, Sam decided to vomit all over my sweater.  In the day’s only stroke of luck, I had progressed down the hallway and found myself right next to the ladies’ room when this wretched event occurred.  I popped inside, wiped the puke off my sweater (I had long since shed the coat) and then quickly re-assumed my place in line.

Thirty minutes later I finally had the ballot in my hand.  But now what?  How did I think I was going to bubble in my votes with a baby in my arms?  Luckily the election volunteers let me skip the privacy booths and go sit in a corner, where I set Sam on his fleece blanket and quickly proceeded to vote for all the candidates who would lose later that night.

When I went to submit my ballot, the delightfully elderly election lady thanked me for voting.  She smiled as she watched the machine inhale my ballot, but that was it.  No sticker.  Where was the sticker?  I was a religious voter, and they always offered stickers!  What kind of Murphy’s Universe was this – the one and only time I actually wanted a sticker, and now I couldn’t have one?

I’m ashamed to admit it, but I broke down and acted like a selfish kindergartner.  There was more than a hint of desperation in my voice when I begged, “Aren’t there stickers this year?”

“We ran out,” she explained.  I should have been celebrating the high voter turnout, but instead I was bemoaning the long lines and lack of stickers.  What was wrong with me?

As we dejectedly headed up the hallway towards the exit, one of the election workers actually pulled a sticker from her own sweater and offered it to us.  I was speechless.  I usually have a hard time accepting such acts of kindness, but I was a sleep-deprived, nursing mother who worked full time and just wanted a damn photograph of my kid on election day.  I don’t know why – I just did, and that’s enough.

We headed back to the car, where Sam threw up all over my coat as I fumbled for my keys.  Remind me again why I didn’t leave him at day care for this errand?

When we got home I threw the patriotic clothes into the wash and started dinner.  Later that night Clark went to vote while I gave Sam a bath in preparation for his big photo shoot.  After his bath I lubed him up with some baby Aveeno lotion before dressing him in his now-clean election day clothes and affixing the coveted sticker to his belly.

As I was setting him in the photo chair, I accidentally stepped on his bottle of lotion.  Half the bottle squirted out, soaking the carpet, chair, and everything within a two foot radius.

No way was I going to let a little lubrication landmine get in the way of this photo shoot.  I swiftly moved him to his crib, where I managed to capture one or two photos before he ripped the sticker off his shirt and tried to eat it.  Sigh. 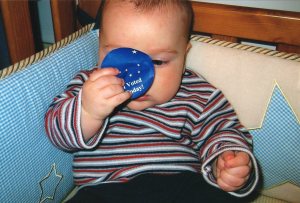 Deflated, I returned to the living room to clean up the lotion.  But… it was gone!  And there was Kodi, wagging her pathetic little chocolate Labrador tail.  She had licked up half a bottle of lotion!  I spent the next half hour on the phone with poison control, trying to determine just how bad Dimethicone 1.2% is for a canine.

Luckily, the only ill effect was diarrhea.  And so the story came full circle…

As does everything in life.