If there’s one thing I’ve learned, it’s that beloved books make great birthday party themes.  At the age of two, our two-year-old Maggie was seriously obsessed with one book:  Mary Engelbreit’s Mother Goose.  And so it was decided:  a nursery-rhyme birthday party!

I had fun with the invitation wording: 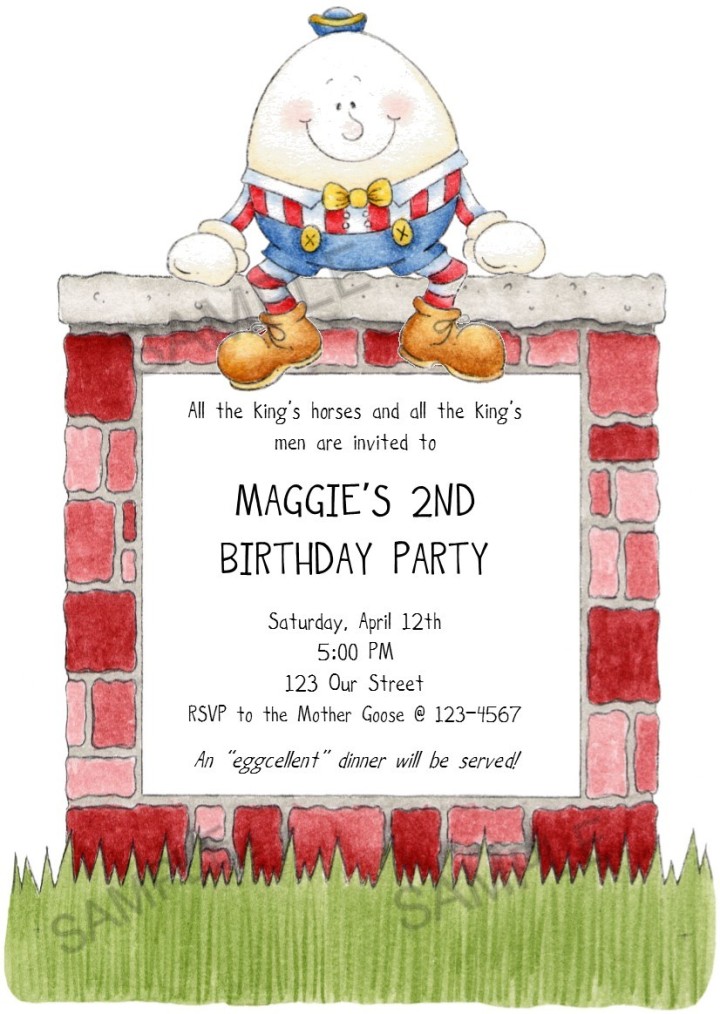 The Humpty Dumpty cake, on the other hand, was not so fun.  I tried my best with the fondant frosting, but that stuff is a challenge for amateurs like me.  In the end, I was pretty proud of this adorable Humpty cake!

Humpty’s wall was baked in loaf pans, and Humpty himself was baked in round pyrex bowls.  The hat is fake, but everything else was edible.  (Well, as edible as fondant gets…)

Most of the kids were toddlers, so the activities were all short and simple. 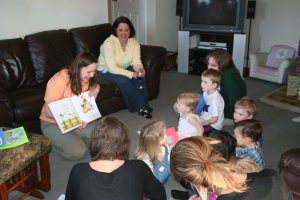 We made a Humpty Dumpty pinata, and “put him back together again” after he was split open.  The toddlers loved playing with the tape! 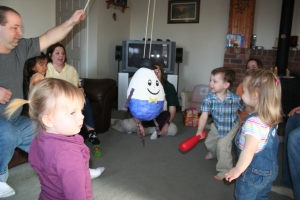 An Easter egg-shaped mylar balloon was the perfect base for the Humpty Dumpty pinata.  Be sure to start your pinata at least a week in advance, depending on how many layers you will use.

The last activity was loosely based on Jack and the Beanstalk.  We threw a tarp on the floor along with a few bins of dried beans.  Add some measuring cups, scoops, utensils, and dishes.  The kids were happy for the rest of the evening!

The party favor was a homemade CD called “Not So Goosey.”  It was a CD of not-so-silly music with great children’s songs from Raffi, Laurie Berkner, Peter Paul & Mary, Marlo Thomas, and the Beatles.  We still play this CD in the car once in a while, six years later!  Here are some of the favorite songs:

Here is the cover I made for this compilation CD: 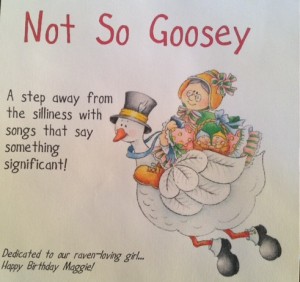 Looking back, this is truly one of my favorite party themes.  The activities weren’t too structured, it left plenty of room for toddlers to play, and what toddler doesn’t love Mother Goose?

In honor of Maggie, here are some of my favorite two-year-old snapshots:

Messy Maggie with the ice cream face is funny, but Sam’s horrified face is priceless! 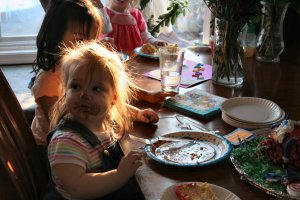 Proud girl pouring her own cereal (oops!) and sleeping in a big girl bed: 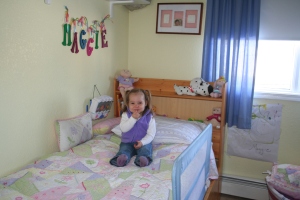 And both kids loving the doll furniture she got for her birthday!

A special birthday, and special memories!  If you have a toddler, I highly recommend a Mother Goose birthday party!