Well, we did it.  After years of dreaming, we actually bought a boat.  It’s a 24-foot 2003 Bayliner Ciera, pictured here in Prince William Sound on our Maiden Voyage: 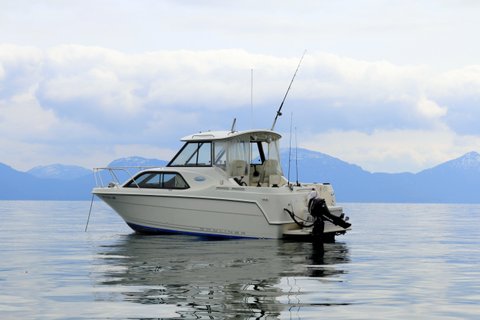 There are more sensible ways to spend money, but this will be a great way to unplug and explore as a family.  We have a limited amount of time to pack in childhood memories with the kids, and hopefully when they’re teenagers they’ll be willing to hang out with their dear parents if it means camping in one of the most pristine wilderness areas on the planet.

As a boatwarming gift, I bought him a journal and promised to record our boating adventures.  Here is the first entry (but this digital version has photos):

We were so excited to get the boat in the water for the first time.  It was Memorial Day weekend, so a bit busy at the launch but it’s a big ocean with plenty of room for all.  We spent 3 days/2 nights in Prince William Sound.

Clark launched with Cliff around 11:30 on Saturday 5/24.  They spent several hours cruising to Shotgun Cove, Po Bay, and Ziegler Cove learning about the boat.  An alarm blared due to low fluid in the outdrive, but once that was fixed all was well.

The kids and I met Clark around 5:30.  Cliff had left in his own boat, so our family was solo for the first excursion.  We also had 8-week-old Tess, who did great for her first boat ride!

We spent the first night in Shotgun Cove.  The water was flat calm and we anchored in 30 feet of water.  It was overcast, but temps were in the 50’s – 60’s and it did not rain.  We made several excursions to shore and explored a wrecked ferry on the beach there.  Sadly, we also saw a few otter skeletons and even a dead otter washed ashore. 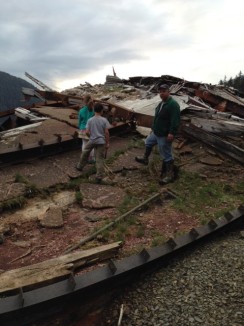 Sam loves to skip rocks on the beach, and Maggie enjoys collecting rocks and shells.  As for Tess, she seems to enjoy eating kelp! 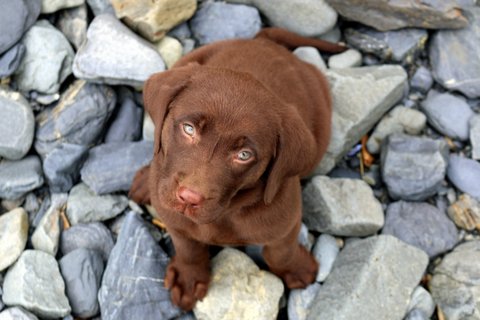 The kids and Clark fished a bit, but we didn’t catch anything worth keeping.  It was still fun to see all the unique creatures from the bottom of the sea.  Sam was the luckiest fisher for this trip.  We caught several small Pacific cod, some black rockfish, kelp greenling, and one ugly Irish Lord! 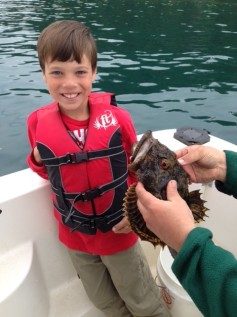 We all slept great on the boat.  Maggie didn’t even need her Dramamine – maybe it was the calm seas, or maybe it was our close proximity to shore.  Either way, we were all relieved she did not get sick!

The next morning we discovered that our fresh water tank was leaking, as the spigot sputtered its last drops while Maggie brushed her teeth.  We had a few bottles of water and decided to stick with our plan to camp a second night.

We moved to Pirate’s Cove for the second night.  The grill worked great to heat up some chicken and link sausage.  We also tested the stove to boil some pasta for the kids. 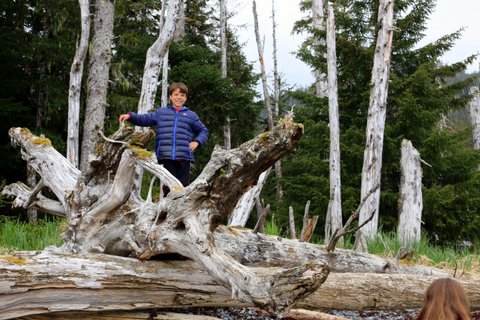 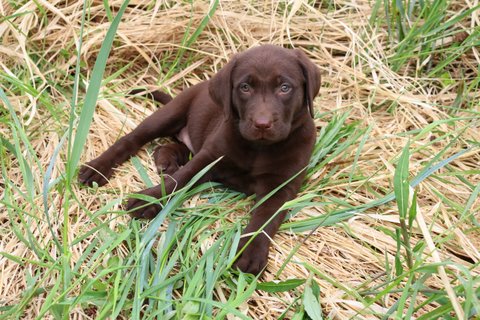 The kids were excited to help raise/drop anchor, steer the boat, and oar the dingy to shore.

We brainstormed for new boat names, but so far nothing has grabbed us.  I like Big Red, Clark likes Boss Hogg, and Sam just wants to call it Bob.  So for now the name remains the Julia Christine.  The throw ring says “Double D” and we can also see another name that has been removed.  Some say it is bad luck to change a boat’s name, but we will christen it properly when we find the right name!

By the end of the weekend we had burned 36 gallons of fuel.  The tunnel fee with a boat was $20 (Bear Valley – Whittier), launch fee is $20, Clark’s parking fee was $27 (plus my car $30 for 3 days).  Clearly this is not the most economical hobby, but somehow it feels worth it!

When we entered the harbor in Whittier there was a large queue of boats waiting to take out.  This was probably the most stressful part of the weekend.  Between the breakwater and harbor slips, there was a very narrow path to navigate.  Luckily the harbormaster opened another takeout lane and helped us land the boat.  To expedite the line, he was even giving people rides to their vehicles/trailers.    Clark did a great job of quickly loading and securing our boat to the trailer so the line could keep moving.

Clark and I both agreed that it was a wonderful weekend, but not terribly relaxing.  We saw spectacular scenery, a bit of wildlife (three seals) and enjoyed the family time.

It was great to all be unplugged and enjoy old-fashioned games like shut-the-box and Connect Four.  (The kids also enjoyed new games like Pokemon!)  We also had fun with the children’s activity books from the Coast Guard – talking and teaching about boating safety.  We all have a lot to learn!

We were so exhausted by the time we got home that the kids cooked dinner – goulash – and it was an early bedtime for all.  Luckily unpacking and cleaning up the boat went pretty quickly, since much of the supplies and gear will remain aboard.

This should be the first of many memorable family excursions!