The day was a bit overcast, so we didn’t make the decision to go boating until after breakfast.  Dad and Mom were here for a visit and we wanted to get out so we decided to give it a try.  We all packed our rain gear and crossed our fingers that we wouldn’t need it.

We saw Cliff and his dog Paint at the launch and I marveled at his ability to launch solo.

We didn’t have any trouble getting the boat off the trailer and into the water.  Clark and Dad went to park the truck and we were finally ready to head out around 2 PM.  Unfortunately it turned into our most stressful launch yet.  Everyone but me was on board, and as I tossed the ropes on and prepared to board myself the boat died.  Clark drifted away from the dock and I was helpless.  He tried to throw a line back to me, but we missed and now it was floating in the water.  He couldn’t start the engine again with the line in the water, so luckily Dad was there to walk around the boat and climb onto the bow to pull the rope in.  Clark restarted the engine and got the bow back to the dock, where I scrambled on board.  It was pretty nerve-wracking and Mom commented that we might end up on YouTube that evening!

We all took a deep breath and cruised over to the waterfalls and kittiwake rookery.  From there we motored up a very choppy Passage Canal.  We hoped to see whales again, so we headed back to Hobo Bay where we had so much luck the week before.  We didn’t see any, so continued further into Port Wales towards the moraine.  We did see sea otters and pups – just as adorable as last week! 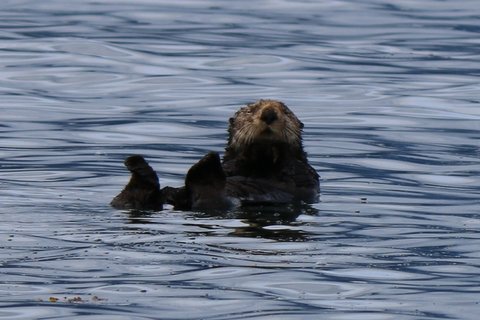 We went to Granite Bay for some fishing.  This was an especially scenic bay with amazing rock formations and small islands. 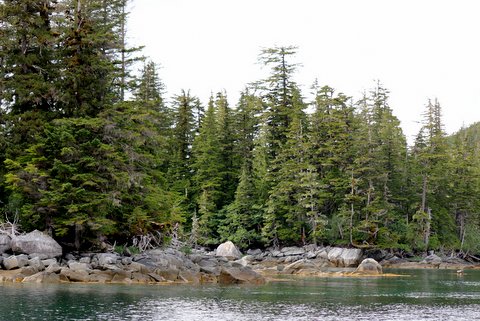 The kids reeled up one fish after another – it was almost comical to hear them exclaim, “Got one!  Got another!” every few seconds as poor Dad’s line bobbed along the bottom without a nibble.  They mostly brought up small Pacific cod, but we did see an ugly Irish Lord covered in worms.  At one point Maggie appeared to have a very large fish, and Clark felt the pole and confirmed it was a big one.  He told me to get the net ready.  Maggie struggled for a few minutes to reel in her catch, and we were all waiting with anticipation to see what it would be.  Imagine our surprise when it finally came to the surface and was a rock!  She was devastated.  “All that work for a ROCK?!?” she exclaimed.  We all laughed – especially Mom – at poor Maggie’s frustration.

We decided to move on and troll for salmon, but since we didn’t plan to go to shore on this short excursion there was the bathroom business to think about.  Mom was game to go off the back of the boat rather than use the toilet on board, so we all turned the other way to give her privacy.  A few moments later Dad quipped that the sea level had just increased by a few feet and the water temperature was elevated as well.  Sam got the joke immediately and burst out laughing – he chuckled about it the rest of the day.

Our lack of fishing luck continued as we trolled for salmon near Esther Island.  Clark had one bite but it got off right away.  The kids weren’t as interested in trolling and moved down to the berth of other entertainment: 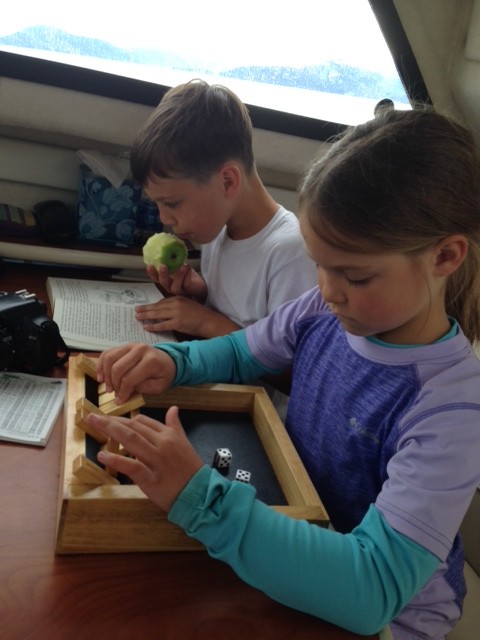 Tess was with us but she literally slept the entire day on the boat.  I was worried she would keep us up all night.

And then it was time to head back to the harbor.  Since I was now walking around the boat I hoped it would go better.  Unfortunately there is no way to know in advance which side of the dock will be open for retrieval until you get there.  We had the buoys set up on the wrong side, so I had to scramble up front to untie them and the line at the last minute.  I yelled at a man on the dock and asked him to give us a hand.  I had the buoy moved, but threw him the rope before it was attached to the boat.  Another fail!  Somehow we managed to get tied to the dock before damaging our boat or anyone else’s.  Clark went to get the trailer, and again the boat loaded up easily.

Just when we thought the stress was complete Clark started pulling the trailer out of the water, but we had forgotten to raise the boat motor so the prop was dragging on the pavement of the ramp.  We were all yelling and screaming for him to stop but he couldn’t hear us over the noise of the diesel truck.  Finally he saw us waving our arms and stopped before major damage was done.

We were both a bit short-tempered as we washed up the boat, but when we got home we started to plan how we can do things differently in the future.  An extra set of lines and buoys for the front of the boat will eliminate the last-minute scramble.  Mom and Dad reassured us that with practice we will figure it out  Let’s hope they are right!