Sam is so many things:  middle schooler, soccer fanatic, Harry Potter aficionado, and aspiring YouTuber.  And now we add teenager to that list.

Take last weekend, for example.  Sam slept until some ridiculously late hour, so his breakfast was cold.  When he finally slinked down the steps we were all ready to play an afternoon game of cards, but Sam took forever to eat.  His dad had dealt the cards, and we were all sitting at the table awaiting our fourth player.  “Don’t worry about us!” his dad said sarcastically.  “We’ll wait…”

That’s when Sam exploded.  He slammed down his plate and screamed, “I’m MICROWAVING my SAUSAGES!!”

The rest of us tried not to laugh (out loud) while we waited for the timer to ding.  Sam eventually stomped into the room, with annoyance on his brow and a greasy sausage patty in his fingers.  He took one look at our faces, which could no longer contain the laughter, and then he burst into laughter himself as well.

Truth be told, I think Sam was as shocked by his outburst as the rest of us.  He recognized he was being ridiculous, and thankfully he was able to laugh about it.  This time.

I know things are changing.  We’ve been watching old episodes of The Wonder Years and the drama between Kevin Arnold and Winnie Cooper speak to him on a new level.  He’s a middle schooler now, and last year he learned almost as much in the hallways as he did in his classrooms.  The school dances (conveniently held from 3 – 4:30 PM in the school cafeteria) were especially enlightening.

The transition to middle school was a big deal, and he handled it well.  His days got much longer between earlier mornings, after school sports, and late nights with homework.  But he kept his big blue binder pretty organized, nothing fuzzy grew in his locker, and he emerged from 7th grade with all A’s.  He made a slug of new friends, and they all share his hobbies and interests.  They host Harry Potter movie marathons, talk on the phone about upcoming debate tournaments, dream about ways to monetize their YouTube channels, and love the freedom of hitting the ski slopes together.

On the last day of school he found himself behind a podium, representing his team and giving a speech to the entire 7th grade student body.  You can see half of the audience in this photo:

After that whizbang end to the school year, it’s no wonder that Sam asked to keep his birthday low key.  He only invited two people:  Lia, one of his oldest friends, and Adam, one of his best buds.  His grandparents, aunt, and cousin were also in town, so he was surrounded with people who love him.  Everyone loaded up and headed to Girdwood to celebrate, where we kicked off the festivities with a hike to the hand tram on Winner Creek trail: 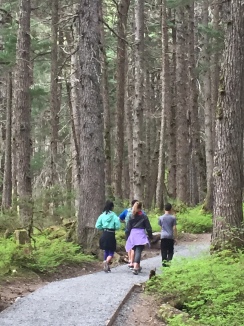 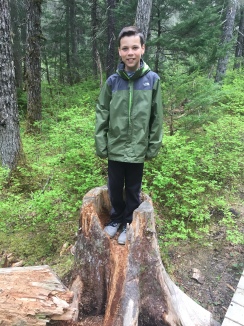 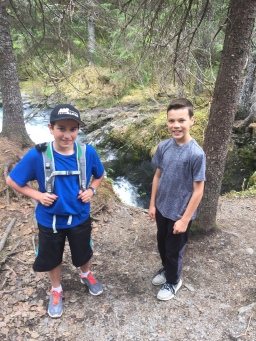 After the hike we checked into the hotel, and the kids rushed to the pool while we ordered some pizzas.  Sam opened his gifts, including the special soccer ball that we all signed with wishes and advice for his teenage years.  He loved it!  His grandma’s fudge cupcakes were a hit for dessert, and the kids watched Fantastic Beasts and Where to Find Them. 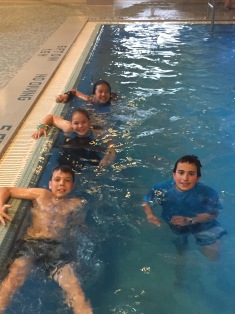 He went to bed as a happy 12-year-old, and woke up a teenager!  We celebrated with more swimming, and headed up the tram for lunch.  What a view! 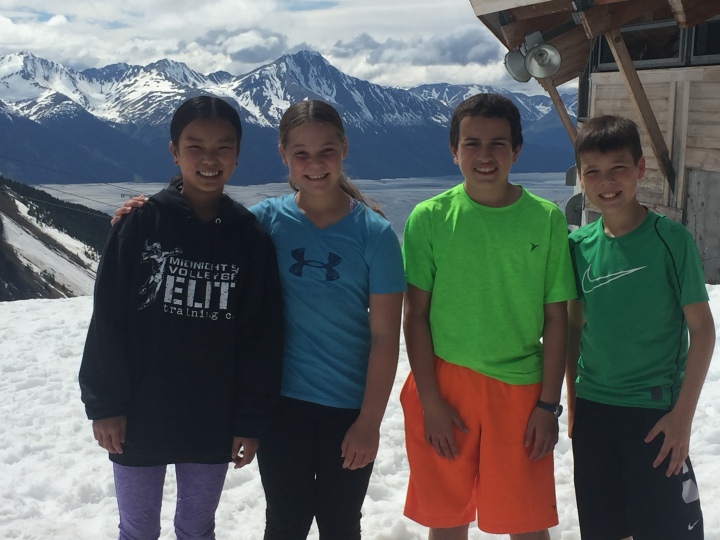 In Sam’s world, the best gift of all was the launch of his summer soccer season!  After his game we had a nice family dinner, cake (thanks to Aunt Elle for teaching me how to draw a soccer ball on the back of an envelope before I attempted it with frosting), and gifts.  Clark and I got him a camcorder, and Maggie and his grandparents shocked him with a giant soccer net.  He was thrilled!

Sam ended the day in the backyard with his beloved dog, juggling his soccer ball at sunset. 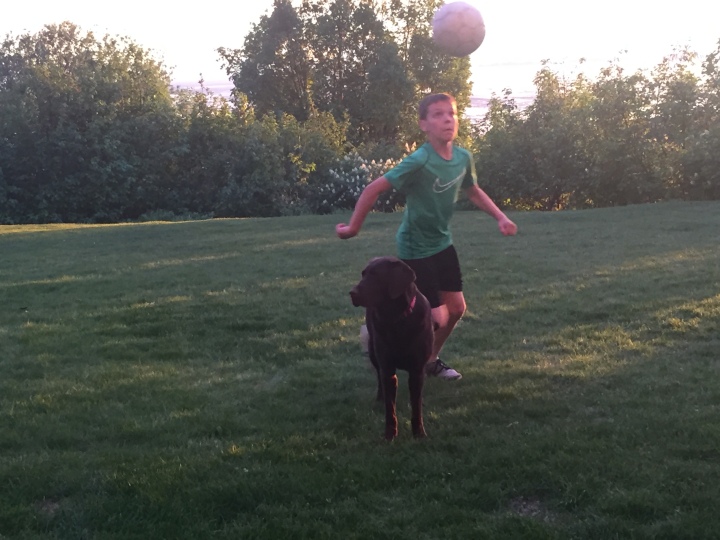 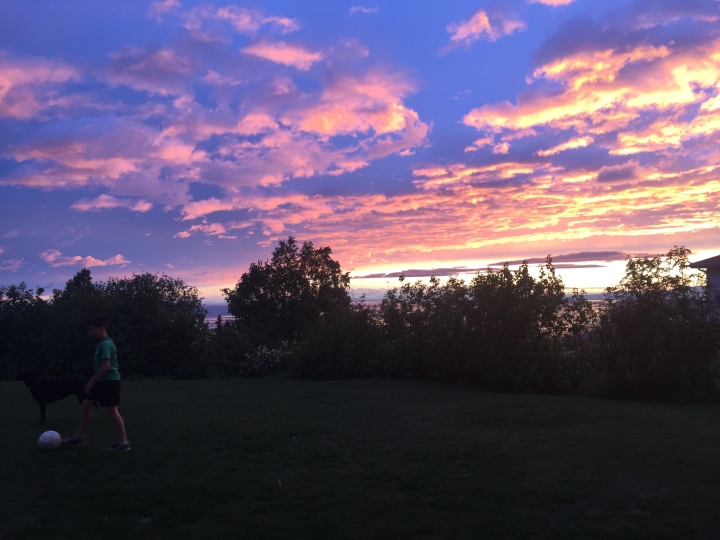 Happy Birthday, Sam!  You might be a middle schooler, soccer fanatic, Harry Potter aficionado, and aspiring YouTuber… but you’re also our son, and we’ll love you through every passion and phase.  We’ll be on the sidelines of your soccer games, the bleachers at your band concerts, and in the audience at your debate tournaments.  More importantly, we’ll be here at home… whether you turn into a surly beast or not.

Let’s shoot for not, okay?

One thought on “We Have a Teenager in the House!”