Long gone are the days of planning themed parties around my children’s passions.  Last weekend Sam invited a few friends via SnapChat, and I think the theme was “Come hang at my house and we’ll avoid my parents as much as possible.”

In all seriousness, Sam and his friends are all great kids.  They even let me torture them with one of my mystery dinners.  I do love planning those things! 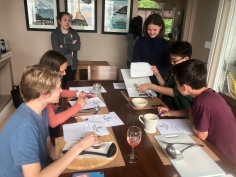 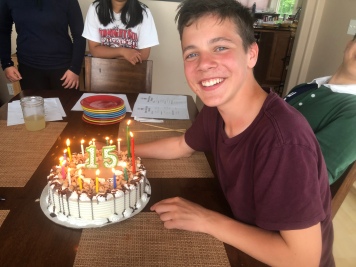 This mysterious menu was filled with everything you could possibly want in a taco bar.  We’ve learned it really is best to have one waiter per guest, so I recruited Maggie, her friend Olivia, and our family friends Nancy and Lia.  I ran kitchen duty while Clark supervised (that’s what I’ll call it, anyway).  Here’s the decoded four-course menu: 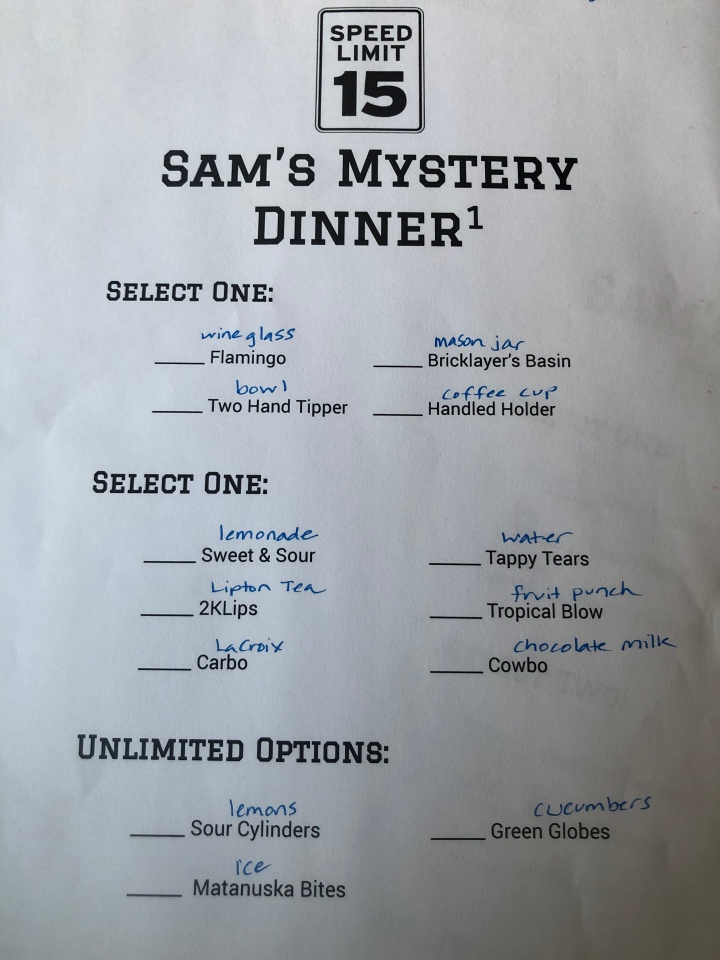 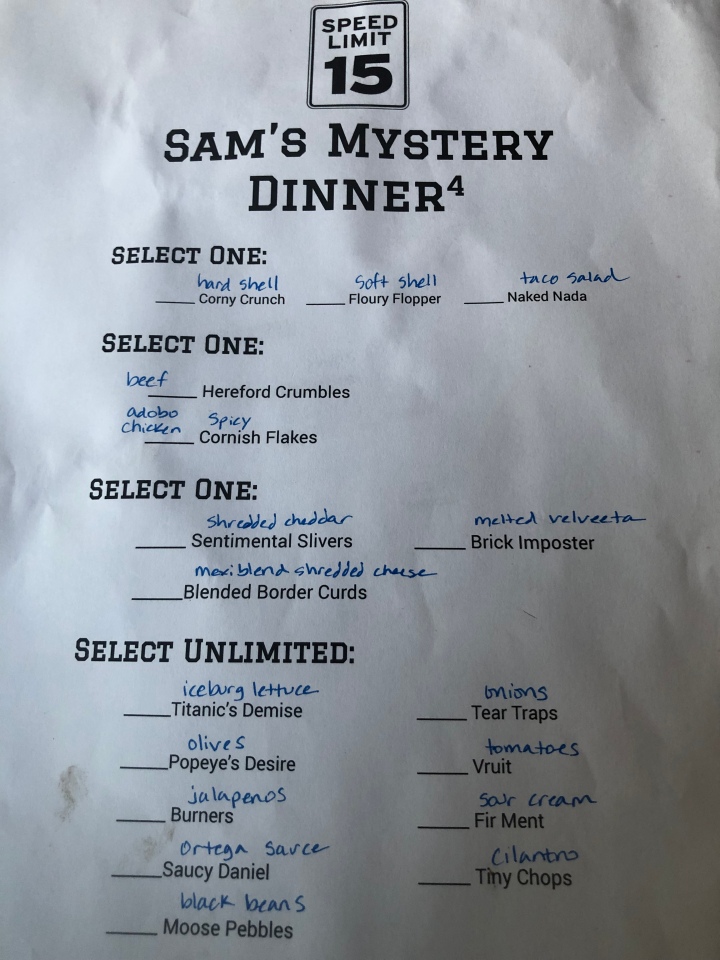 Sam and his friends are a pretty analytical crew of kids, so they enjoyed the decoding process.  They intentionally ordered different menu items so they could decipher them, and argued with the wait staff when they didn’t think my clues were accurate.  For example, with “Popeye’s Desire” they were expecting spinach.  Don’t these kids know about Olive Oyl?  You’d think 15-year-old boys would realize that girls are more important than vegetables!

A classic moment was when his friends belted out The Star Spangled Banner instead of Happy Birthday.  It felt like I was in some alternate Christmas Vacation universe!

Today was his actual birthday, and it was booked.  He got up bright and early to spend 6 hours at a trap shooting tournament in Birchwood (a 45 minute drive), back home to quickly clean up for an early dinner at Benihana, and then soccer practice until 8:15.

(We have yet to hit that sweet spot of summer scheduling… last year we didn’t plan enough, so gadgets became a frequent battle.  This year we may have overdone it!)

At any rate, the day was fabulous.  It hit 70 degrees, he had dinner with an old friend at Benihana, and he loves his summer soccer team.  He asked for a Snickers ice cream cake, and I finally made one that didn’t melt all over the pan when we cut it.  Woo-hoo!  (Note to self:  ice cream cakes take a loooooong time to freeze solid!  I finished this one 48 hours before we cut into it!)

And gifts!  The boy was spoiled!!  My parents gave him the subscription to Spotify Premium he has been coveting, and Clark’s mom sent some cool cash.  Always a good option for a teenager!  Maggie got him a hand pump for his soccer balls, and Clark and I got him a new pair of street running shoes from Skinny Raven.  He’s got elaborate plans to prepare for fall’s cross-country season, and apparently HOKA running shoes are pivotal to the process.

The scroll in the picture above has a story I won’t fully share, but here’s the gist.  Sam read a fair amount of Shakespeare in his freshman English class, including sonnets.  This past mother’s day he wrote me a Shakespearean sonnet – which, if you’ve ever tried, is crazy hard.  Exactly 14 lines, exactly 10 syllables per line, and a rhyming pattern of ABABCDCDEFEFGG.  Don’t even get me started on the iambic pentameter rules.  I was the kid who scrawled many “Roses are red, violets are blue…” themed cards for my parents, so his gift spoke to me on a pretty deep level.  I instantly burst into tears when he gave it to me, before even reading it.  (So as you can imagine, I was a hot mess after actually reading the thing!)

So for Sam’s birthday I turned the tables and wrote him a poem called Sonnet 15: For My Son. It was my first sonnet ever (probably last?) but the title still seemed appropriate.  Not gonna post the actual poems here, but we’ll both keep them forever.

Damn we are proud of this kid!  Is he a teenager?  Yes.  Does he make us crazy at times?  Beyond yes.  Does he need to lose the sarcasm?  OMGpleasewhenandyes.  Would he play video games all hours of the day and night if we didn’t nag at him?  I fear the answer is yes.

But on the whole, he is so well-rounded, balanced, level-headed, witty, and kind.  He just finished his freshman year with a 4.0, even after battling us to take the most challenging classes.  He signed up for cross-country running and skiing, and made the JV soccer team.  He earned a varsity letter in debate, thanks to participating in the state tournament.  He joined Key Club, was a founding member (and apparently secretary?!) of Ping Pong club, and competed in the district Global Citizen competition.  He and his friend William started a ridiculous (my opinion) Instagram vlog, which as of today has 245 followers.  (Even I must admit the last episode had an epic interview with their Biology teacher.)  He is back at piano lessons and the sound of him playing is a gift to us all.

And let’s not forget life skills!  Thanks to his dad, Sam has learned to drive, grill, use power tools, hunt, set up camp, whittle, fillet fish, raft, use a compass, build fires, and a zillion other things.  I have a sneaking suspicion Clark is also secretly passing on advice about girls.  Lord help us.

Because yep, girls are in the equation now too.  I’m doing my best to help in that category as well… but have been met with a few eye rolls.

So here we are, on the biggest roller coaster ride of our parenting lives.  We are strapped in tightly and our safety checks are in place.  Our teen is still beside us, but suddenly no one is driving and all illusions of control are gone.  We are ratcheting up, and I know the future holds free falls that might be terrifying or exhilarating.  Or both.  Some rides are smooth, while others jolt you to the core.  There are twists and turns that can literally turn a world upside down.  And there are risks.

But in the end, these wild rides make the best of memories.  So we smile and step on, filled with faith that all too soon the ride will end safely, and we’ll wonder why we ever hesitated getting on in the first place.

One thought on “Fifteen: One Cool Ride”